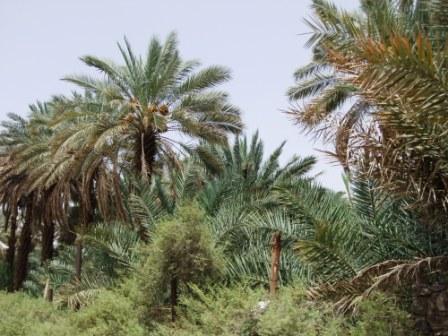 ORCHID OF SALMAN FARSI R.A
In fact it is the orchid of syedna salam Farsi in madina.it is now deserted and only a broken dry well is there .syedna salman farsi was the slave of a jew and muslims wanted him to get free . jew was cruel man. he was ready to release but in return he demanded for a date orchid cosisting of 1000 or 300 trees with full of fruits. It was not easy task . it requied long time , then the miracle occured. Prophet Muhammad sallalla ho alli hi wasalam order to dig land and He sallalla ho alli hi wasalam spat on a seed and sowed . when he sallalla ho alli hi wasalam sowed second seed , the fist one had become tree. . in this way whole orcjid became ready in a little time. when jew saw this miracle he became muslim. he not only freed syedna salam farst R.A but awared that orchid to him.  In Aeabic it is called BAGH-E-SALMAN FASRI AND IS JUST 4 k.m FROM MASJID NABVI SALLALLA HO ALLI HI WASALAM 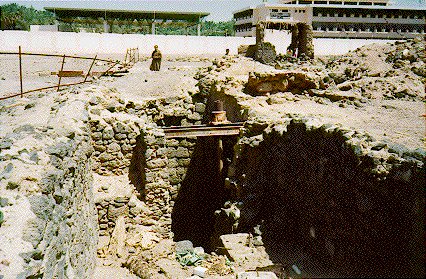 Well in salam Farsi Orchid
Please read complete article
(courtesy by al miskeen wbsite)
a gentle but searing breeze rustles palm fronds that seem to whisper stories from the golden era of our Blessed Prophet SallAllahu alaihi wasallam and his noble and honoured Sahabah RadhiAllahu anhum.
This very patch of earth witnessed Salman Farisi RadhiAllahu anhu toil for more than four years along with his early times of becoming a Muslim after a long and arduous journey seeking the Truth. SubhanAllah, how many tests Allah Ta’ala presented him with. It was while he was high up in one of the date palms on this very ground that he heard the cousin of his Jewish master relaying to the master, as he was relaxing in the shade of his grove, that the man people had been proclaiming to be a Prophet had just arrived in Quba. Salman Farisi RadhiAllahu Anhu almost fell from the tree as a mixture of hope and expectation rippled through him. He had spent years pursuing the tales he had heard that a Prophet would appear and now he could not believe that his search may almost be over…his master berated him and told him to get back to work…but later Salman Farisi slipped away to see with his own eyes if it truly was the Prophet who had just arrived… 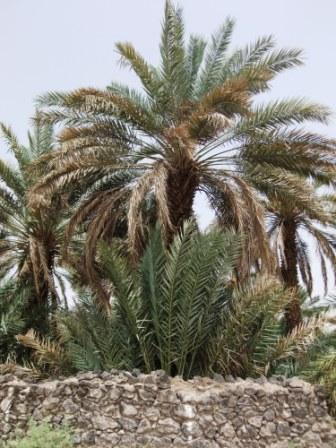 Prior to him embracing Islam he was very curious about all that he heard regarding the Prophet SallAllahu alaihi wasallam. But he still harboured doubts as to believing all that came to his notice. During his extensive travels he had heard from various priests and Rabbis that a new prophet would appear in the Hijaz, that he would have a mark between his shoulders, the symbol of the seal of Prophethood, and that he accepted gifts, but not charity. So this was the opportunity Salman al-Farisi RadhiAllahu anhu had to verify if Rasulullah SallAllahu alaihi wasallam was who so many were pledging allegiance to.

Another opportunity to absent himself from the date grove came some time later when he hurriedly went to Baqi Gharqad after the burial of one of the Sahabah, knowing that the Prophet SallAllahu alaihi wasallam would be there. The Prophet knew what Salman desired, so he shifted his shawl to reveal the Seal of Prophecy, whereupon Salman kissed it and wept and immediately professed the Shahadah, SubhanAllah! But his destiny was to return to this grove as a slave for many years to come…

Salman the Persian RadhiAllahu anhu came to the Prophet SallAllahu alaihi wasallam to seek his counsel and his help. His master, a Jew of the Bani Quraysah, kept him so hard at work on his property south of Madinah that he had never been able to have a close contact with the Muslim community. It had been out of the question for him to be at Badr or Uhud or take part in any of the lesser forays which the Prophet had led or sent out during the last four years. Was there no way of escape from this present situation? He had asked his master what it would cost to set him free, but the price was far beyond his means. he would have to pay forty ounces of gold and plant three hundred date palms. The Prophet told him to write his master an agreement to pay the gold and plant the trees. Then he called on his Companions to help Salman with the palms, which they did, one contributing thirty palm-shoots, another twenty, and so on, until the full number had been reached. “Go dig the holes for them Salman,” said the Prophet, “and tell me when thou hast done, and mine is the hand that shall put them in.” The Companions helped Salman to prepare the ground, and the Prophet planted each of the three hundred shoots, which all took root and thrived.

As to the remainder of the price, a piece of gold the size of a hen’s egg had been given to the Prophet from one of the mines, and he gave it to Salman, telling him to buy himself free with it. “How far will this go towards what I have to pay?” said Salman, thinking that the price had been greatly underestimated. The Prophet took the gold from him and putting it in his mouth he rolled his tongue around it. Then he gave it back to Salman, saying: “Take it, and pay them the full price with it.” Salman weighed out to them forty ounces from it, and so he became a free man.