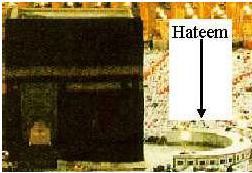 1. A half circled place adjacent to Kabat-ullah is called  "HATEEM".

2 .  It is originally the inner side of Kabat-ullah but in the times of Prophet Syedna Muhammad
(S. A. W.), it could not be built completely due to non availability of funds. It means holy kaba was initially in slight rectangle shape not as squared as we see today. Is walls orininal size was as follows:

ONE THING MUST BE CLEARED IN MIND:
Whole the Hateem area is not Kabbas' inner side
It must be noted here that an area of approximately 3 meters adjacent to the wall on the side of the Hateem actually constitutes as being part of the Ka’bah, the rest falls outside the Ka’bah. It is however clear that Tawaf must be performed outside the complete area of the Hateem. The rest part is of Hateem was actually the shelter of Syedna ismael allihi salam and his mother syeda Bibi hajra and it is called HAJR_E_ISMAEL. 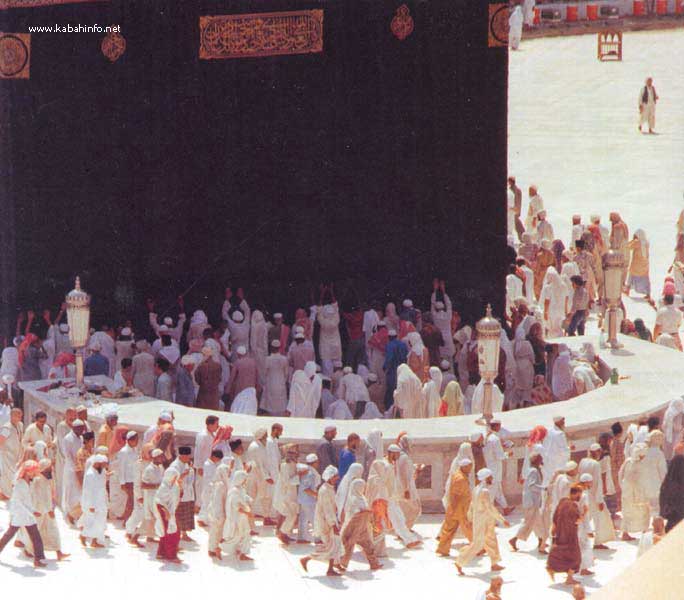 Whole curved wall area is not inner part of Kaba .The area only 3 meters from kaba wall is
inner kaba area and rest the back area till the hateem curved wall is the spot of syedna ismael
A.S and syeda Bibi Hajras' shelter where they used to live.

3. Hateem is actually the inner part of kaba + shelter of Ismael A.S  and because of this fact the tawaf is done out side hateem. 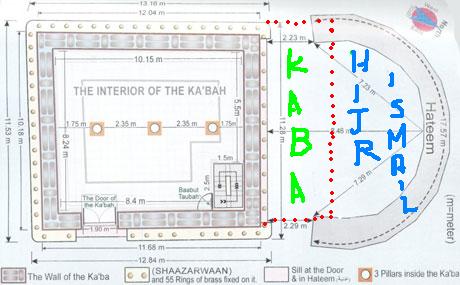 In green showing inner portion of Kaba . In blue it is shelter of syedna ismael, never remained in side kabba.(Red dot wall is just imaginary to understand position.

It means tawaf is done in rectangular shape covering holy kaba as well as hateem and hijr-e-ismael . Secondly no compulsory salat (5 times mandatory prayers) is permitted to offer in hateem. Hateem is closed when the imam leads 5 time compulsory prayer. However pilgrims may offer their nafils (optional prayers) in this area. pilgrims try to offer two rakat nafil here quickly as it is very little place and many many muslim brothers and sisters wait for their turn. Ladies may also offer their nafil salat here behind men at any time.

4 .This place has been kept open  so that a worshiper could  get the opportunity to pray (NAFIL) here. It is just an equal honour for a faithful as he prays inside the Kabat-ullah. 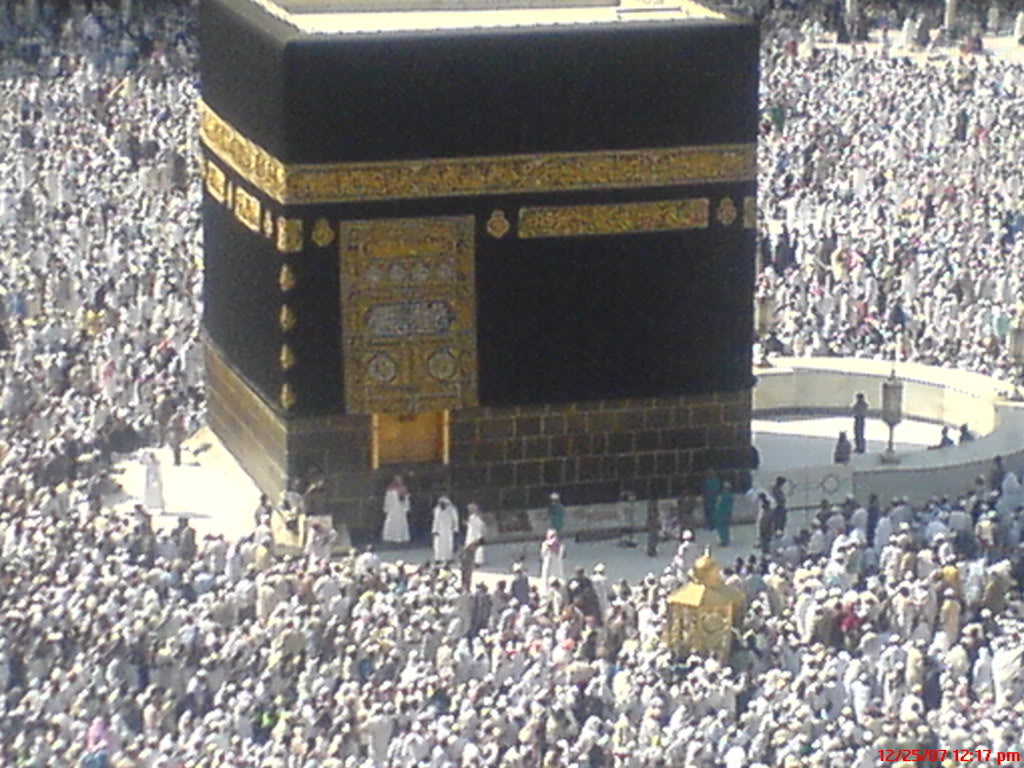 5 .  According to  a school of thoughts, it is the place where the Prophet Muhammad (S. A. W.) was taking rest in  meraj night when Jibrael (Allaihi Salaam) came and kissed his feet. Muhammad (S. A. W.) woke up and then the Jibrael  Allisisalam told him that he had come to take him for MERAJ in skies.

6 .  It is said that Syedna ISMAIL (Allaihi Salaam) and his Mother Syeda HAJIRA (Allaihi Salaam) are lying to rest under "Hateem" but their physical graves are not visible . people must not be curious to explore the graves of these two noble personalities as it is the place of Almighty Allah and they must try to keep their full attention towards  his Lord. 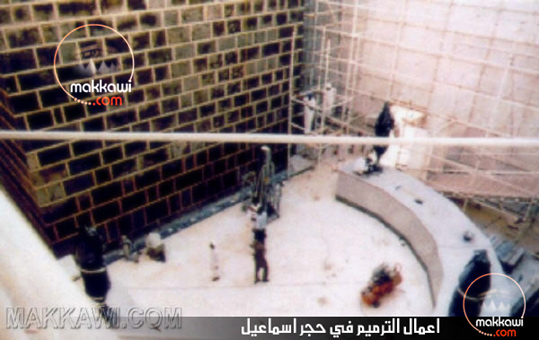 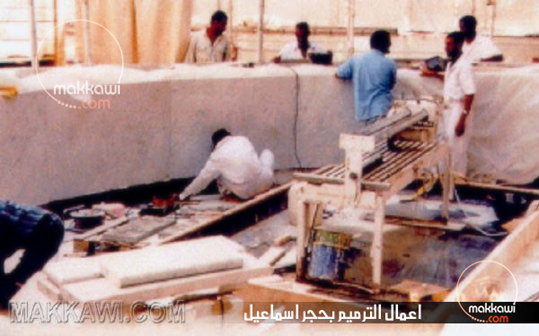 It is a black stone of Heaven.

It is fixed in one of the corners of a wall of Kabat-ullah. 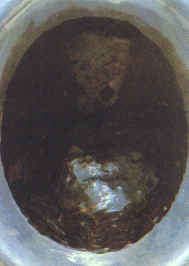 close view of black stone
During "Tawaf", kissing to this stone is essential but if there is a crowd, one can touch or wave hands towards it to fulfil the requirement. In arabic it is called ISTELAM.

seven rounds of 'Tawaf" starts from the place where this Black Stone is fixed.

Now a black line has been drawn on the floor of white "Mutaf", so that people could determine the exact place of stone, if they are far from Kabat-ullah in rush time. 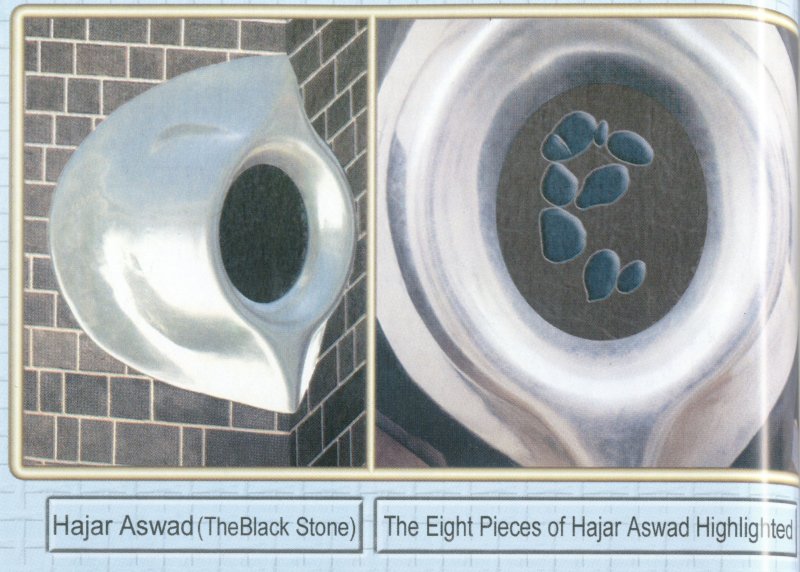 At the end of Muharram, 1351 A.H., an Afghani came and pulled out
a piece of the Stone, stole a piece of the Kabah  covering and a piece
of silver from the Ka`bah ladder. The guards caught him.     Then, he
has been sentenced to death as  punishment. On the 28th of Rabi`  I,
1351 A.H., His Majesty King            `Abdul-'Aziz bin `Abdul-Rahman
Al-Faisal Al-Sa'ud,  came from Ta'if to the Sacred Mosque  where he
reaffixed the piece which had been pulled out by that damned person. He used a chemical    compound    mixed with   musk and    ambergris
specially prepared by chemists to affix that piece .Those eight pieces of hajr-e-Asvad are visible on ight hand pic 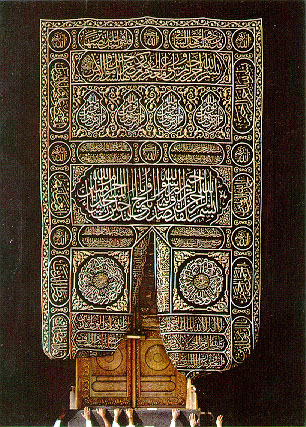 1. The kaba wall which is adjacent to the Golden Gate of Kabat-ullah is called "Multazim".

2. It is just in front of "MUQAM-E-IBRAHIM". It  is just under the benefits and mercies of ALLAH. 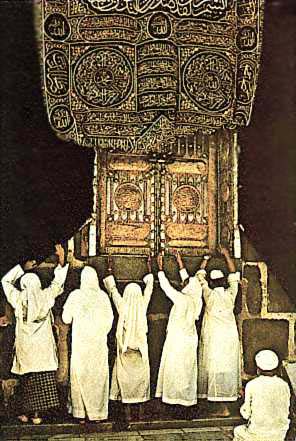 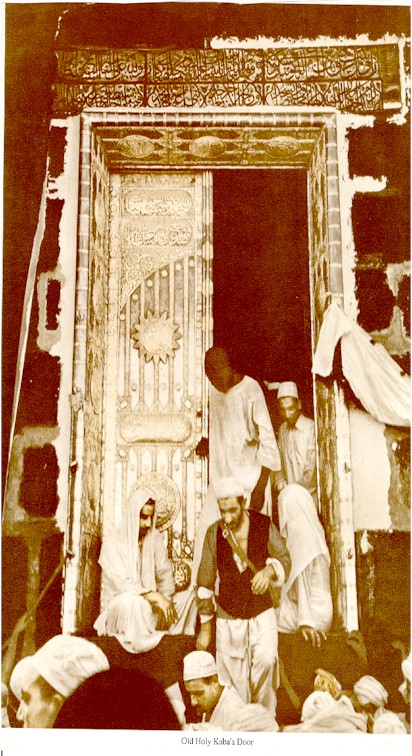 1 .It is a water spout, which drops in Hateem. During rain, when the water of Kaba Roof falls down in Hateem through this Mizab, it is considered very pure and holy water. If  someone gets this chance, he must use this water to wet his whole body. 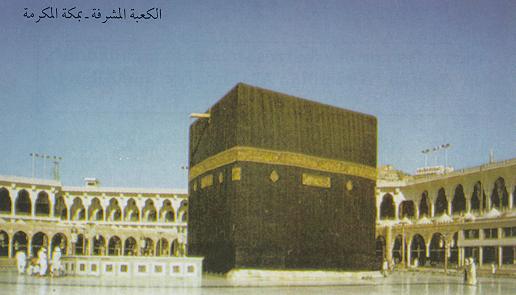 WATER SPOUT  ON THE TOP OF THE ROOF 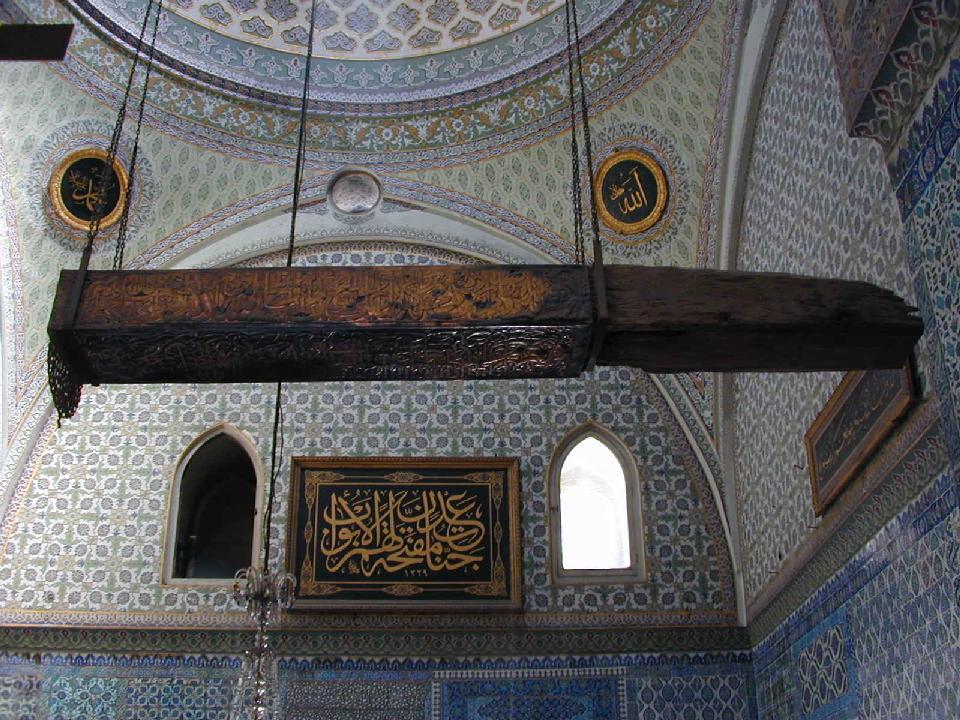 4. According to Prophet P.B.U.H. duas are accepted if begged under mizab. One should beg duas under mizab for heaven, for marriages of daughters, and for avoiding the fire of hell. 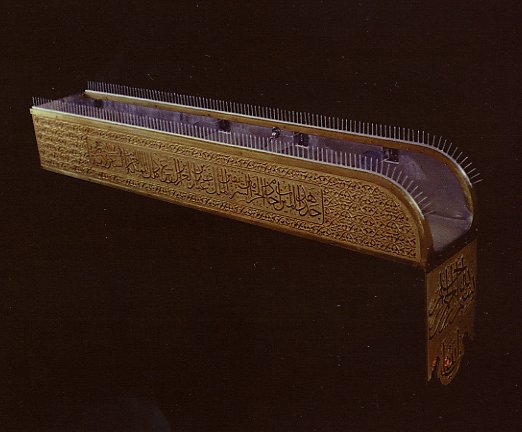 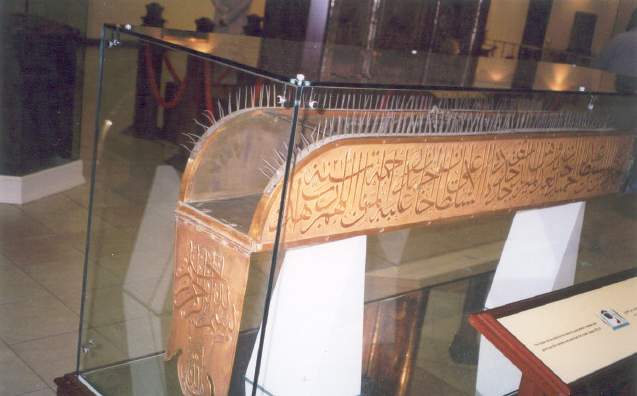