1 .  Although there are 95 gates of "Masjid-ul-Haram" and one can enter  in through any gate yet UMRA GATE, (Bab-e-Umra) has an special importance. it was entering  place where  our Beloved Prophet (S. A. W.) had entered  in haram with the intention of performing UMRA. 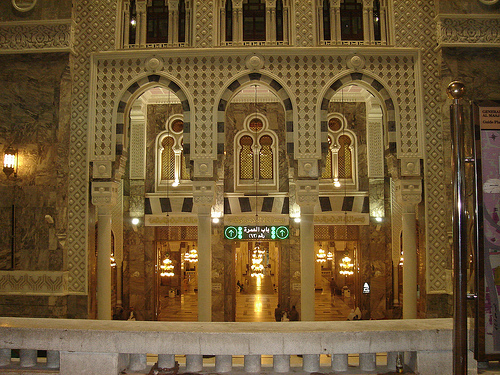 beautiful look of umra gate from outside 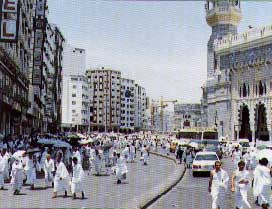 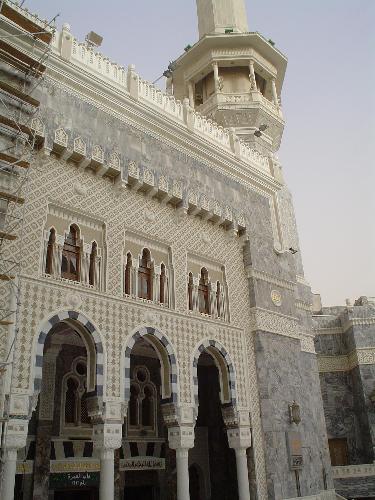 2 .  Outside "Haram", this gate is  just opposite to well known "Makkah Hotel". Inside "Mutaf" inside haram a neon sign of this gate is hilighted and pilgrim can easily find it out.

3 .  Like "Bab-e-Umra", following gates are also hilighted in "Mutaf' with bright neon signs an minarets  are built over them. 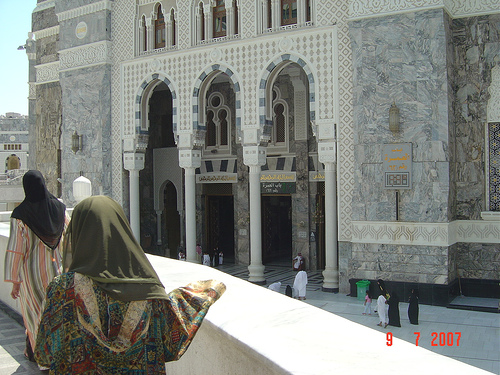 Umra gate which is called Bab-ul- umra in arabic

1. Bab-e-Malik Abdul-Aziz
1. It is gate number one and known as a main gate of haram. it has two minarets and pilgrims can easily see holy kaba in mutaf just stepping in. 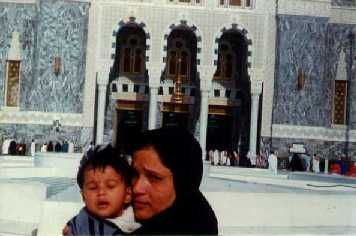 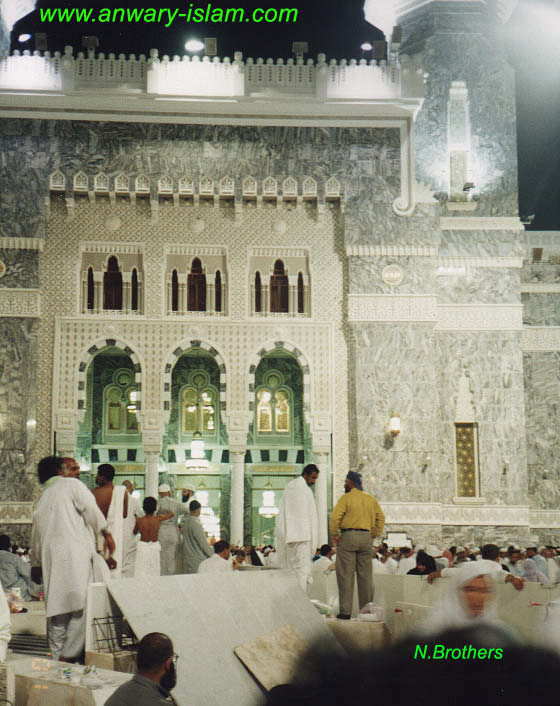 View of Baba-e-Fahad
______________________________
It is the newest and  most modern gate of "Haram" .Two minarets and 3 domes are built over it. Entering in haram through this gate one may not see holy kaba directly. he will have to walk a little in side the enclosure and after left  turn he may see it. it is centrally air conditioned area.

3 .  Bab-e-Umra
It is the place ( Now Gate ) where from Prophet Muhammad (S. A. W.) entered for Umra. Detail of  babe-umra has been mentioned at the beginning of this page.

It is  situated near safa mountain. if someone comes in haram through this gate he will find himself  in MASSA (the place where saie starts). Here lifts are installed for pilgrims which carry them to the upper level of haram. Entering through this gate older and disabled persons may get wheel chairs for saie. From out side haram this gate is just under the palace of king which is built on the mountain  near the  haram named JABAL-QUBAIS (MOUNT OF QUBAIS). One may guess bab-e-safa  easily from long distance  out side the haram and even from mutaf (where tawaf-e-kabba is done) inside haram.  Its' distinguished feature is its' lonely minaret on the gate. rest of the four main gates have two minarets each except bab-e-safa. 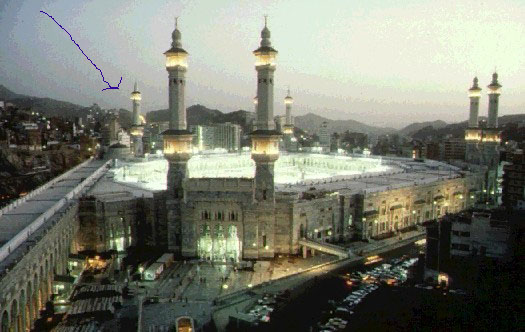 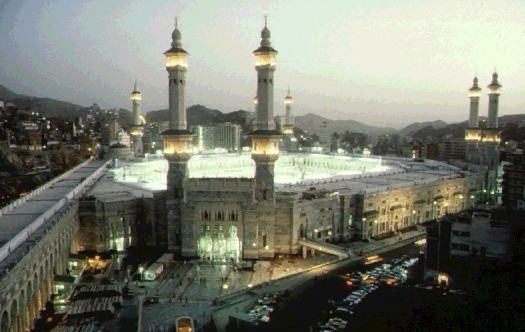 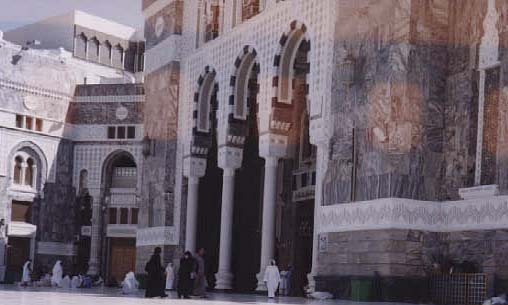 The place where the incident of "Fatha-e-Makkah" was occurred is very near to this gate. Because of such reason it is called "Fathe-Gate". (it means the gate of victory) 1 .  Very near to "Masjid-ul-Haram", there is a white coloured library on which a board "MAKTAB MAKKAH AL MUKARRAMA" is fixed, is the original place where The Greatest Man and The Last Prophet of Allah was Born. It was the house of Abdullah Bin Abu Mutalib - the father of Prophet Muhammad (S. A. W.)

2 .  If someone comes out from Haram through Marwa Gate, which is situated where the last and seventh round of Saie ends and keeping Marwa Gate behind, walks straight over marble flooring outside haram for a few yards, he would see a white coloured house at the dead end of white marble flooring. There is a green board fixed on that house on which Maktab-Al-Makkah-Al-Mukkarama is written. It is the house where the greatest Man of the universe Syedna Muhammad sallalla ho allihi wasalm was born. It is the only house there besides  road. 3 .  The Mother of Syedna Muhammad sallalla ho allihi wasalam Bibi Amina says that  at the time of the birth of Prophet (S. A.W.), I saw a light (Noor) came out from me and  enlightened the whole atmosphere and surroundings and i saw all the palaces situated far . View inside of bith place of prophet Sallallaho allihi wasalam Pilgrims visiting (ziyarat) the holy home of Prophet Muhammad sallallaho allihi wasalam from
out side.

4 .when the prophert was born many miracles had taken palace.The idols which had been kept in the holy kabba fell down to their faces and the fire chamber of emperor of iran (then Persia) which had been burning  since several hundred years extinguished and became cold surprisingly. The most important miracle which may be seen even today is the miracle of "demaged wall"  of  kisra palace.  When the beloved Prophet (S.A.) came to this world physically, the  cracks came in the walls of strongly built "Kisra Palace"which was near "Baghdad" at tirgis. Although the complete palace has now become destroyed and vanished yet the cracked wall is still there as an alive miracle. These are few among many other  miracles relate to the birth of beloved prophet sallala ho allihi waslam.... It is the wall of kisra which   was   cracked at the time of holy birth of   holy   prophet Syedna   Muhammad      sallalla   ho allihi wasalam .Cracks may be seen even today.

Another  view  of  demaged
wall  of  kisra palace. 5 .  The new name of the road where the birth place is situated is known as "Shahra-e-Malik Saud".

6 .  Photography of this place is prohibited.but can take picture from far away by zooming your camera

7.  It is in the bottom of Mount Qubais. It is called Muhalla Qasheeqa.

8 .  Pilgrims must see this place with great spiritual thoughts. It is really a place of honour to see.

9 . Generally this  holy house remained closed and opens in their specific times but saudi administration discourages people to go inside. pilgrims may see it from outside. It depends on your luck may get it opened at any time. (Entrance gate form inside the mulid - Nabi S.A.W is visible) 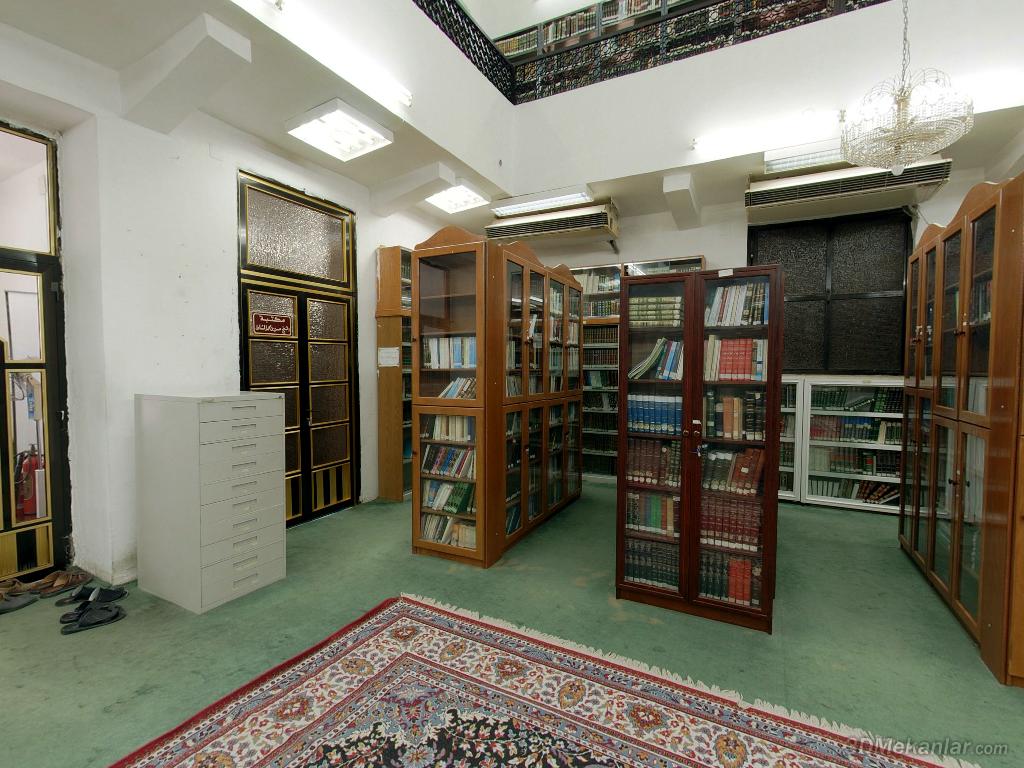 Another inside view of Mulid-E-Nabi which is now a library. 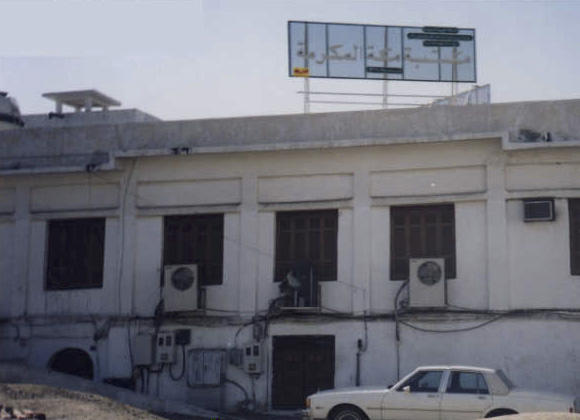 1 .  If someone comes out from Haram through Marwa Gate, which is situated, where the last and seventh round of Saie ends. Just after coming out you will see Market (Bazar) at your left where some shops of hair dressers are situated, the name of this bazaar is Souq-ul-Lail. When you enter in the main wide street of this market. An squared plastic shade is covering the street. Come in this covered wide street, where the shops on both sides are situated. Most of the shops are of  jewellers. You must turn to the first right street. It is the place where Syedna Khadeeja (R.A.) house was situated. Now there is no house to see but it is the place where this historical house was situated.

4 .  It is the house where Syeda Fatima-tut-Zehra was born. A son of Prophet Muhammad (S. A. W.) Syedna Qasim  and other daughters, Syeda Zainab, Syeda Ruqayia and Syeda umme-Kulsoom were also born here.

5 .  Now this house is not there but place my be found by pilgrims with little bit try.

1 .  If you come out from "Haram"through "Bab-e-Abdul Aziz" and walk straight for few yards you will find yourself in a road which is slightly in slope and a multi-storied, modernly built building will be at your right hand. It is called "Muhalla Misfala"- (Misfala means Slope). It is very populated area and both the sides of road have different types of shops and restaurants. When you walk few yards ahead, you find a mosque on your right hand. It is the house of"Syedna Abu Bakar Siddiq (RA)". Although, it is stone throwing distance from "Haram" yet five times regular "Salat" are offered here. Main gate of mosque syedna abu bakar
which was his house

2 .  It is the place (house)where from beloved Prophet Muhammad (S. A. W.) started the journey of migration (Hijart) towards "Madina-e-Munawwara". In the night big and well powered people of "Makkah" were standing with their sharp swords, covering this house with bad intentions. The Prophet (S. A.W.) ordered "Syedna Ali (RA)"to lay over his bed and started to recite the verses of holy Surah of "Yaseen".Prophet (S. A. W.) came  out  with his companion syedna Siddiq(RA) and passed through enemies reciting verses of "Holy Surah Yaseen"and pouring mud over their heads. It was the help of Allah who made enemies unconscious or half sleepy. 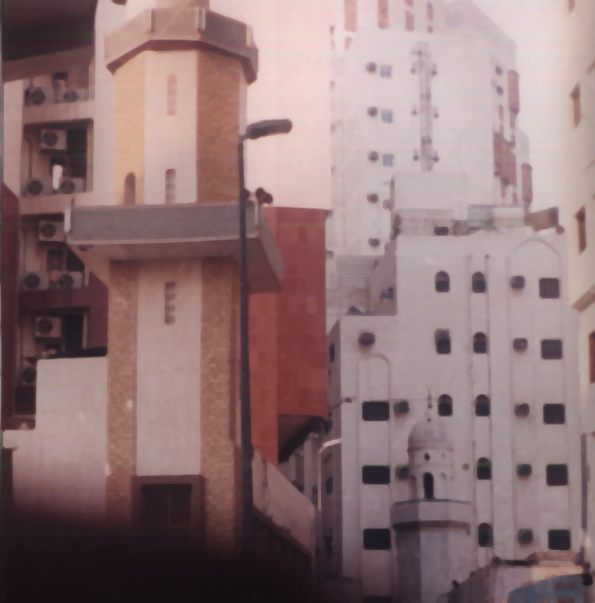 3 .  It is said that two stones are kept in this mosque named "Mutakalim" and "Mutkka". "Mutakalim" is  the stone which said Salaam to Prophet Muhammad (S. A. W.) whereas stone"Mukka" was used by Prophet MUHAMMAD (S. A. W.) as pillow.But now these are not available to see.

4. In year 2010 when Almighty Allah blessed my 10th chance of my life to see holy makkah . i noticed that this masjid  has been demolished (shaheed) and a small building has been constructed. i do not know whether this masjid or any memories of this historic place would be kept or not.Any how pilgrims may see this building keeping in mind that this was the place of masjid-e-hijra or house of syedna abu bakar siddiqi radiAllah ho talla anhoo. 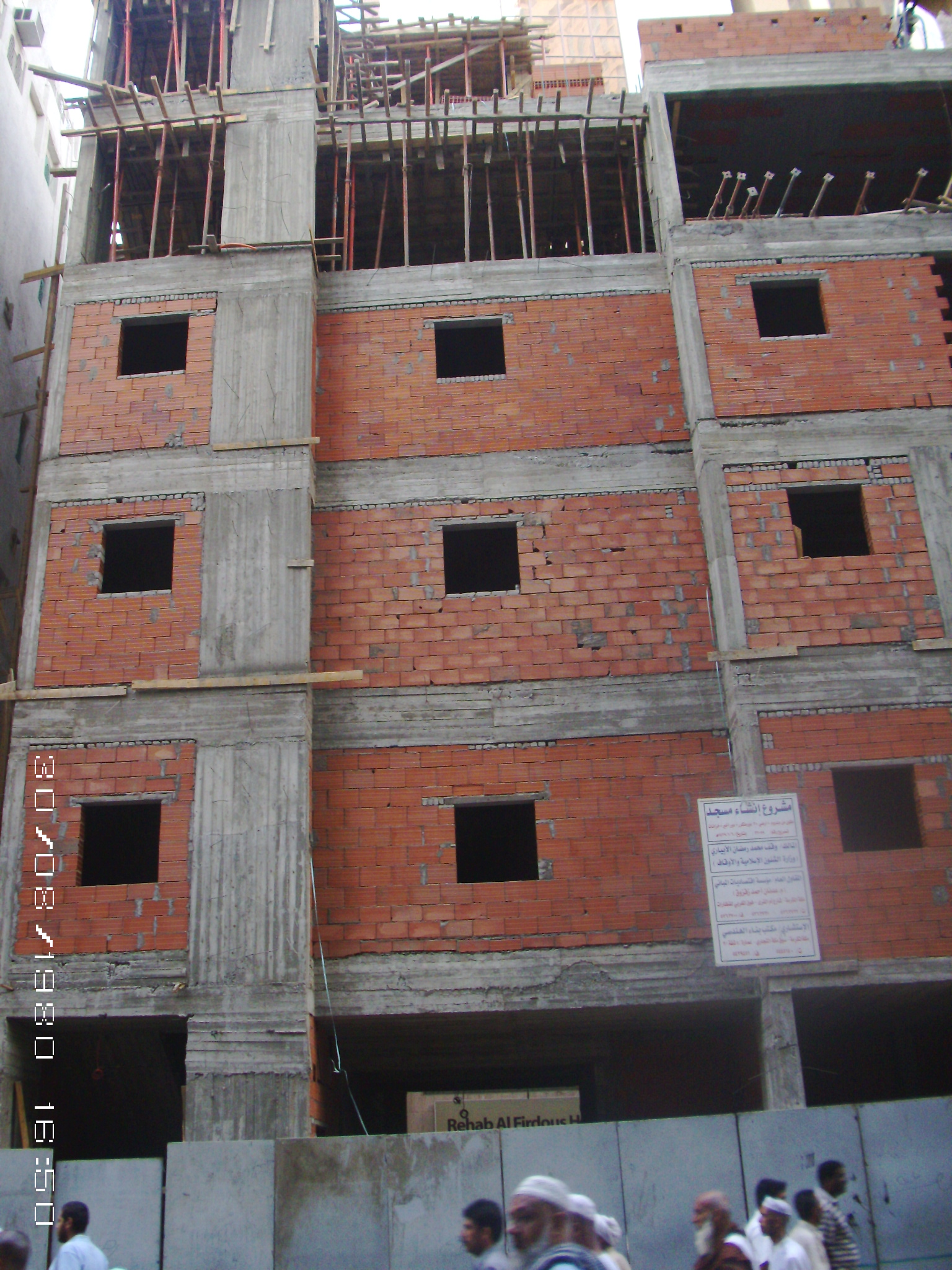 In 2010 this buiding was constructed exactly the place where previously
the masjid Hijra or house of syedna abu bakar was present. Board of civil engineering company over this
building indicating MASJID.