The holy kabba/Makkah is the center of the earth or it is called the navel of the earth..By the commandment of Almighty Allah the whole earth is divided in to three portion:
FIRST PORTION OF THE EARTH.
From the holy kaba /makkah 4 destinations in different directions around Makkah are determined as the boundaries(hudood)of HARAM.in Arabic it is called HUDOOD_E_HARAM.The name and location of these four  boundedness are as under:
1.AREA FROM HOLY KABBA /MAKKAH TO MASJID JURANA which is 20 k.m away from
Makkah on makkah -Taif road.Board indicating dead end of Haram are fixed there.

2.AREA FROM HOLY KABBA/MAKKAH TO HUDYBIA which is 21 k.m away from
Makkah on old Makkah -jeddah highway. Board indicating dead end of Haram are fixed there.

3. AREA FROM HOLY KABBA/MAKKAH TO SHAMISI  which is 25 k.m away from
Makkah on Makkah -jeddah new express way on which now a days pilgrims land at jeddah
airport and the residents of jeddah travel towards Makkah and  it is few kilo meter after
passing famous monument of QURAN STAND (RAHAL ) on the express way if coming
from jeddah . it may be seen by pilgrims easily as they all travel on this road.The sign boards
directing non muslims to divert their vehicle to other directions are fixed here at the place
where the territories of Haram (HUDOOD-E HARAM )starts.Non muslims are not allowed
to enter in pure territories of Makkah.A Check post is also there. It is the spot of shamisi.
If you are vigilant and sun light is there , you may say sign board indicating start of Harm
territories on the right near mount beside highway.

4.AREA FROM HOLY KABBA/MAKKAH TO MASJID-E-AISHA(TANEEM) which is 8
k.m away from Makkah(in fact now in makkah city due to makkahs' wast expansion).Now a
days the residents of Makkah and pilgrims staying in makkah after performing their first initial
umra ,wrap ahram and do neeyat for another umra from this spot.The pilgrims might see sign
boards fixing here indicating HUDOOD-E-HARAM (territories of Haram) 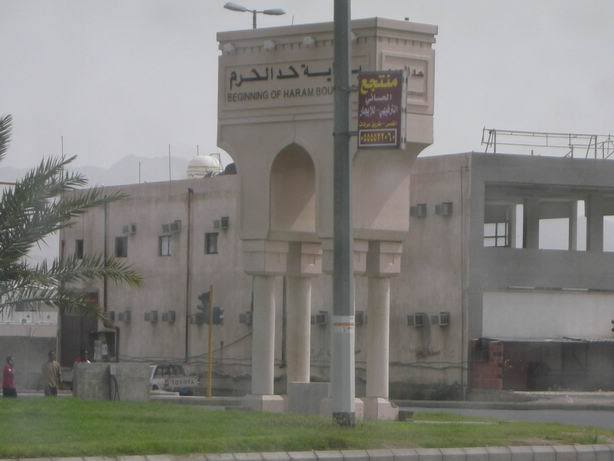 One of sign boards indicating the start of Haram boundries.

The residents living between kabba/Makkah and the above four destinations are technically called "HARMEE" and obviously the area lies under these jurisdiction is technically known as "HARAM".

IMPORTANT TO NOTE
a)The HARMEE people is bound to go out of Haram jurisdiction (whether jurana or Hudaybia or     shamisee or Masjid-e-Aisha) to wrap ahram and neeyat for UMRA. But

b) The HARMEE people is allowed to put on ahram from their residence for HAJ.(Harmee people generally
perform Haj -e-ifrad.) 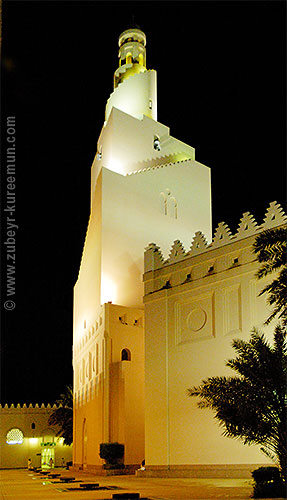 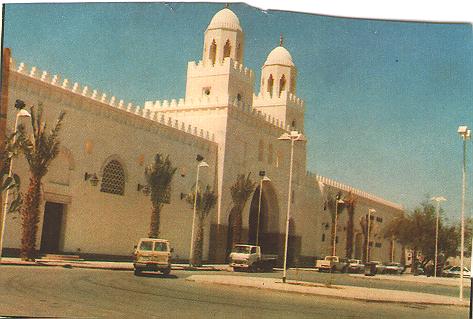 out side view of ber-e-Ali(zul- halifa)

2. Al--Juhfah:
It is appointed location for the citizens of  syria (Sham) and it is not ruin and people now consecrate from distance and lies to the west direction of it at a distance of 22 miles. The highway from Madina, towards Makkah, is parallel to Al-Juhfa from Hegira way - at a distance of 208 kilometres from Makkah while Rabigh is 186 kilometre's far from Makkah. Form Rabigh, the citizens of the north of the Kingdom of Saudi Arabia consecrate along with the northern coast of the Kingdom to Al Aqaba, the northern and western African countries as well as the citizens of Lebanon, Syria, Jordan & Palestine along with others who pass by it. 3. Qarn ul - Manazil:
Its' distance from the inside of the valley / wadi to Holy Makkah is 78 kilo meters, form which consecrate the citizens of Najd and the whole East pilgrims: the citizens of the Gulf, Iraq, Iran and other who pass by it. Moreover the citizens of Taif perform consecration from Wadi Muharram which lies along Al Hada highway west of Taif which is 75 kilo meters far from Makkah besides other pilgrims who pass by it. It is not an independent appointed time, but it is the upper road for Qarn ul Manazil. 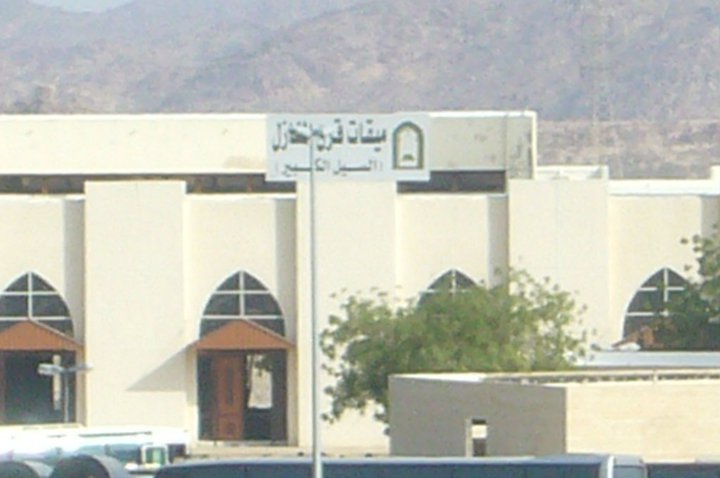 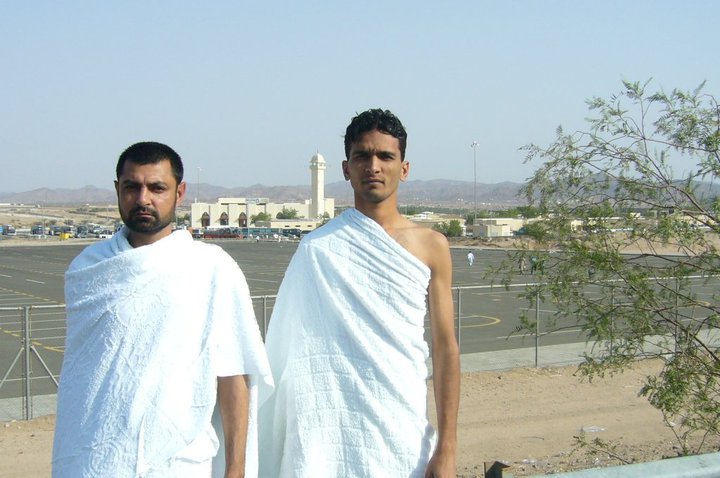 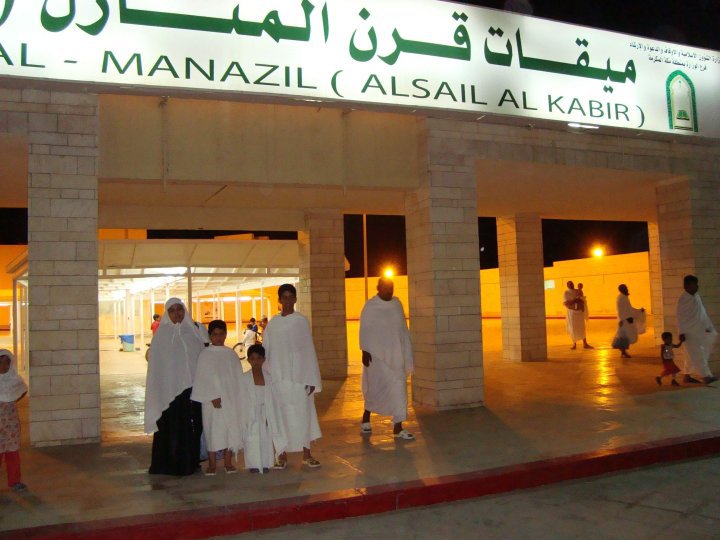 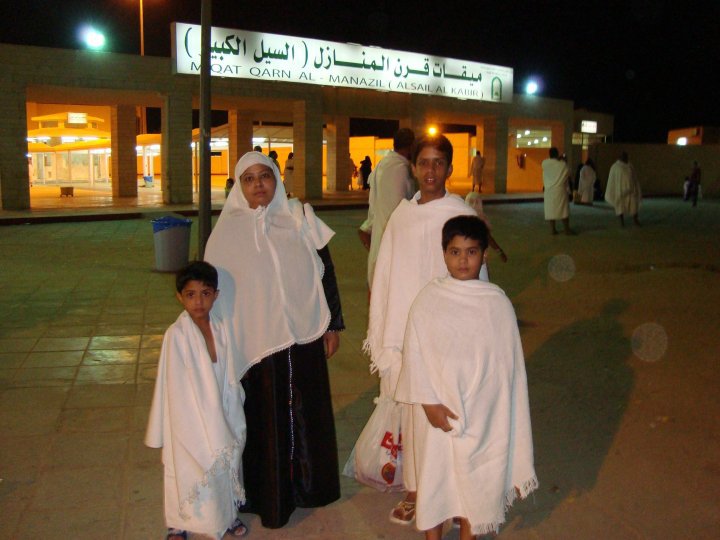 4. Yalamlam:
Here is a well called Al Saadeyyah and Yalamalm is a great valley/ wadi which descends from Al Sarawat towards Tihama and then pours into the Red Sea. The place & location of consecration of it is 120 kilo meters far from Holy Makkah. Ibn Abbas - Allah's blessing be upon them said, "The prophet/messenger of Allah - Allah peace & blessings be upon him - appointed Zul Halifa as a location for the citizens of Madina, Al Juhfa for the citizens of Al Sham, Qarn ul Manazil for the citizens of Najd and yalamlam for the citizens of Yemen. 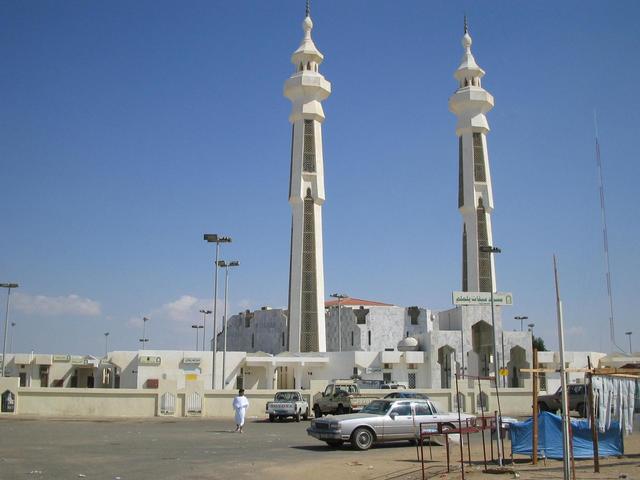 It is the also the meeqat for pakistan and indian pilgrims but they could not see it as they travel by air and flew over it. They are for them and for whoever comes to them for performing Haj & Umrah rites and even the inhabitants of Makkah consecrate them". 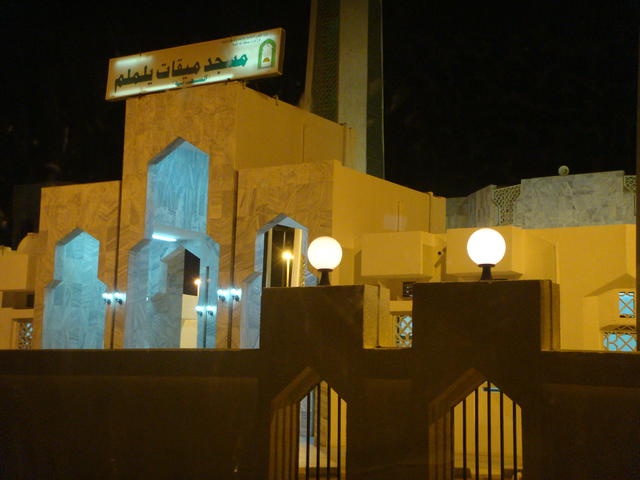 POINT TO NOTE
The HAALEE people may wrap Ahram and do neeyat from their residence to perform UMRA.

POINT TO NOTE
Afaqee people are bound to wear ahram and do neeyat before crossing one of above meeqats for HAJ as well as for UMRA. For Afaqee people Meeqat is verty inportant both for Haj and Umra.