2 .This platform had produced a number of Islamic Scholars, which preaching spread Islam all over the world. Near about four thousand companions got the expertise of Deen (Quran and Sunna). Syedna Abu Hurraira (RA), Syedna Abdullah Bin Umer (RA) and Syedna Anas Bin Malik (RA) are the  most well known and renowned scholar of this institution.

RMOVE A GENERAL CONFUSION
REGARDING THIS PLATE FORME

3 .  If you enter in Masjid-e-Nabvi from Bab-e-Jibrael you will see two plate forms, a few yards ahead. One of them at your right and the other will be at your left hand adjacent to back wall of Prophet's
(S. A. W.) shrine. It is called "Mehrab-e-Tahajjud". Right one is mistakenly thought "Suffa Platform" by general public. This plateform was actually the place where the gaurds and workers of Masjid-nabvi used to sit in the era of turks. This is not suffa plate form and the same was not present in the holy era of prophet Muhammad sallallaho allihi wasalam. Please see following pic.

Generally this plate form is though to be suffa plate form which is not true.
It is the plate form of guards and workers made by truks after a long time of
holy Prophet sallallaho alli hi wasalams' physical era.

4. In present Masjid Nabvi , no indication of suffa plate form exist . we can only visualise it. it is now a plain space just behind behind riaz-ul-jannah towards court yard .

5. One more thing must be clear in mind that there two spots of Suffa plate form in Masjid Nabvi . Initially it was built at a particular spot ant it remained there till 7 Hijrah and after very first extension of Masji Nabvi in 7th hijrah by the holy hands Prophet Muhammad sallallaho alli hi wasalam, it was shifted to another spot. To understand the location of both Suffa plate form please see following diagrams. 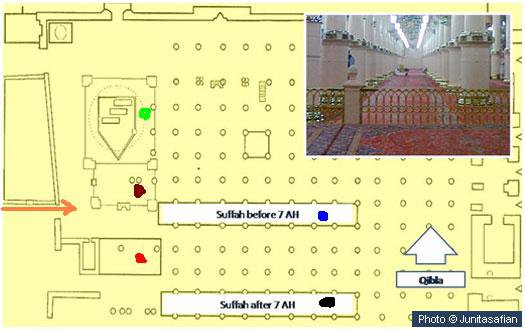 1 .  Just adjacent to the back wall of Prophet's shrine, you will see a small platform. It is known as "Mehrab-e-Tahajjud", where Prophet  (S. A. W.) used to offer Tahajjud Prayer (midnight optional prayer). 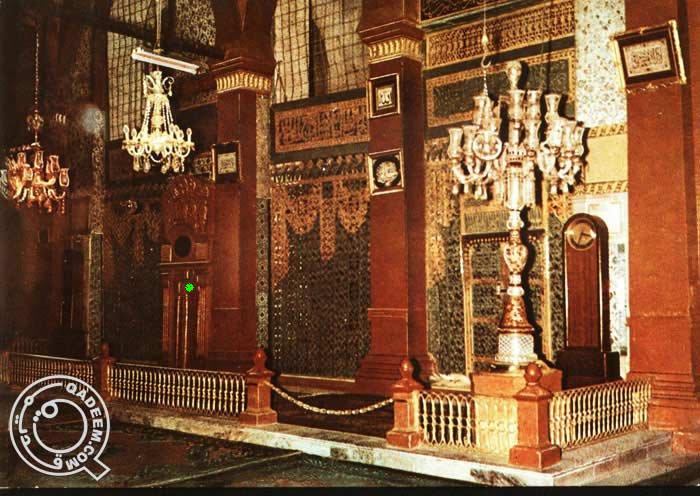 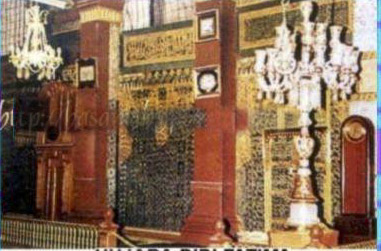 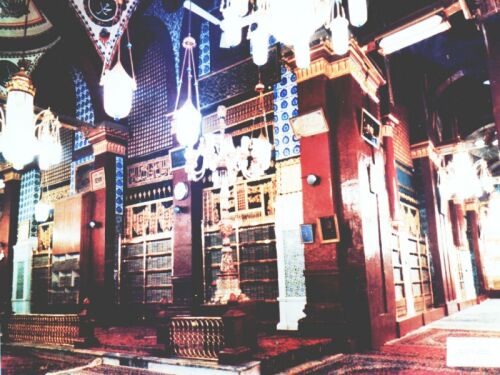 Another good look of mehrab-e-tahajjud .it is in fact back wall of rodha-e-Rasool. A side wall of Rdha-e-Rasool (Holy head side) is also visible.

2 .  Now a days, "Khuddam-e-Haram" sit here and keep recitation of Holy Quran. It is just opposite Suffa Platform.

3 .   It ,is to be noted that this back wall is in fact the wall of bibi Fatima R.As' house.  Actually the room [Hujra] of syeda Aisha siddiqa R.A and the room [Hujra] of Bibi Fatima R.A are adjecent to each other in this way that the back wall of bibi Aisha R.A  room is the partition wall between these two holy rooms [Hujras] . At presnt both the rooms look  a common  single room ( i do not know the  partition wall inside is still present or not ) . So in  general
sense the front wall of  the Roza-e-Rasool  sallalla ho allihi wasalam where the golden grill is present , is actually the wall of Bibi Aisha R.A Hujra and the the back wall where this Mahrab-e-Tahajjud  is present is the wall of Syeda Fatima R.As' room. 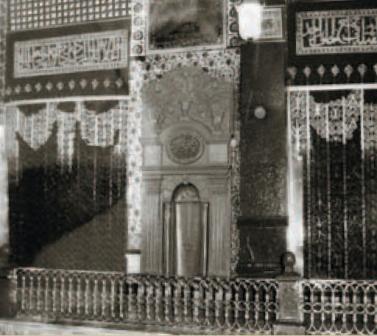 Close look of Mahrab-e-Tahajjud on the back wall of bibi
Fatima R.A hujra [ room ] 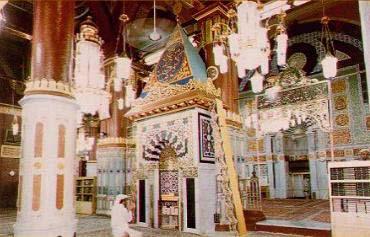 The first one (little far ahead) is mehrab-e-usmani where imam leads prayers today. The nearer one (man beging) dua) is the mehrab-e-nabvi where prophet sallalla ho allihi wasalam used to lead 5 time salat-ul-farz.

2 .  In the era of Caliph Syedna Usman (RA) this extension was done and this Mehrab was constructed. Therefore, it is called Mehrab-e-Usmani.

3 .  If you enter from Bab-e-Baqqi and cross the shrine of Prophet (S. A. W.) you will find it at your left. It is not the area of Riaz-ul-Janna. 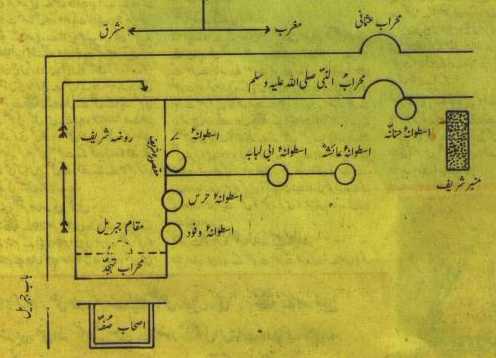 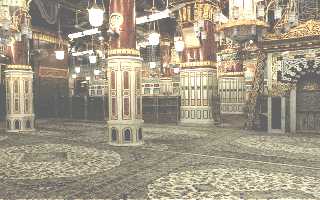 There are six important ISTEVANAS (Pillars) in Riaz-ul-Janna, where pilgrims feel proud to offer Salat (Prayer). The spiritual importance of these pillars is being described below.

1 .  In the area of Riaz-ul-Janna, this pillar is situated in between Mehrab-e-Nabvi (Place of Prophet's Prayer) and MIMBER-E-NABVI (place of delivering Sermon). It is just adjacent to right side of Mehrab-e-Nabvi. 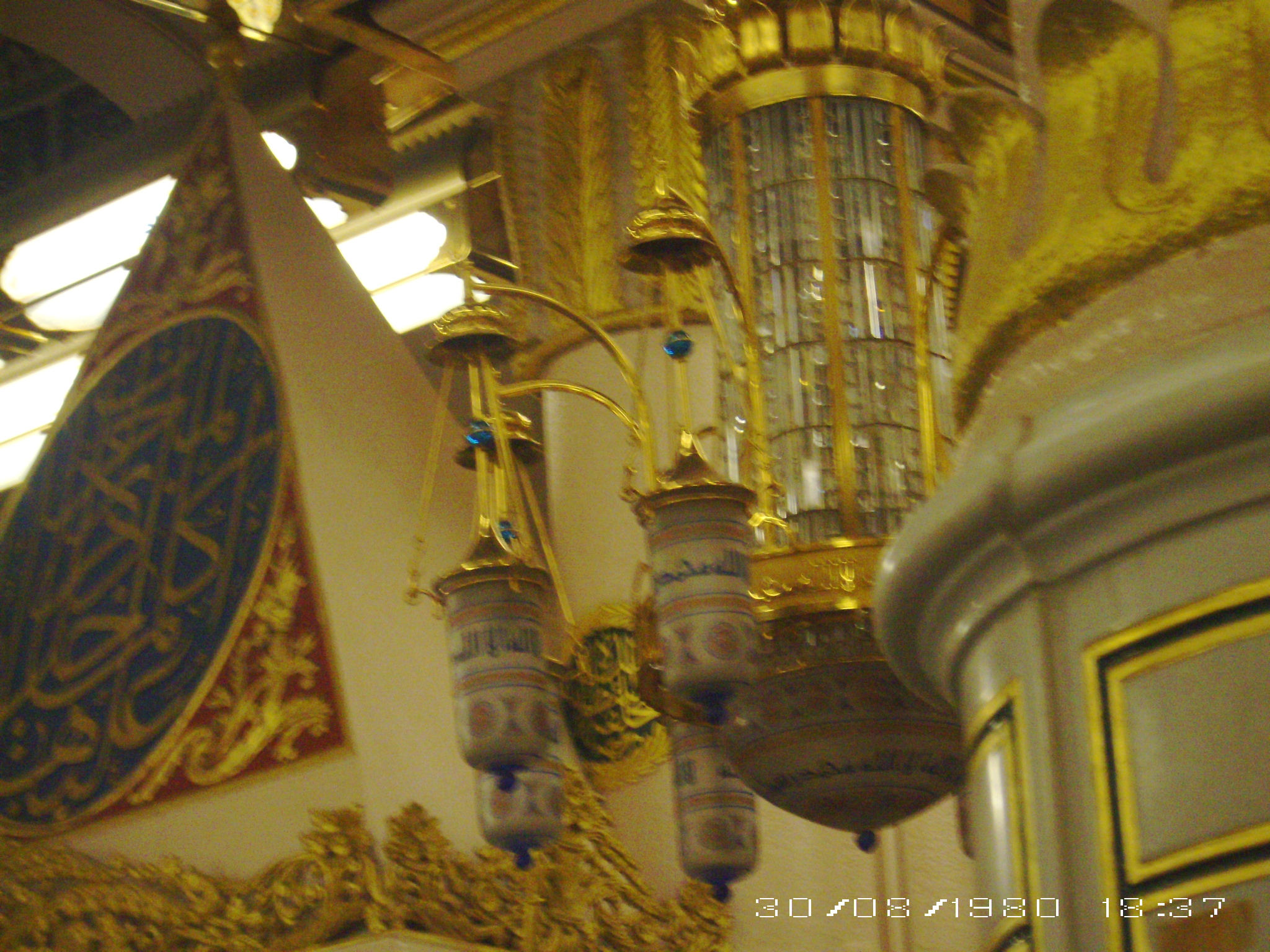 2 .  In early stage of this mosque, here there was a stem of dates tree and Prophet (S. A. W.) use to deliver sermon holding it. It was the temporary place and when the new MIMBER became ready. Prophet (S. A. W.) left this stem and started to use newly built MIMBER. First time, when Prophet
(S. A. W.) stood over a new MIMBER for delivering sermon, the companions who were siting on the floor, heard that anyone was crying but they could not  understand who was that. Prophet (S. A. W.) stepped down from his MIMBER and put his hand over that stem with love and kindness. Actually, that stem was weeping. The loving touch of Prophet (S. A. W.) and made that stem some satisfaction and it stopped crying. This pillar is built at the point where this historical stem was present.
Since the sound of crying  of the  stem was resembling to the cry of a  camel child which often cry in desert after being lost or separated from it's mother. In arabic the cry sound of such camel child is called
'' Hanana''. Because of such  crying sound, this stem is named istewana-e- Hanana .

ONE MORE NAME OF THIS STEM 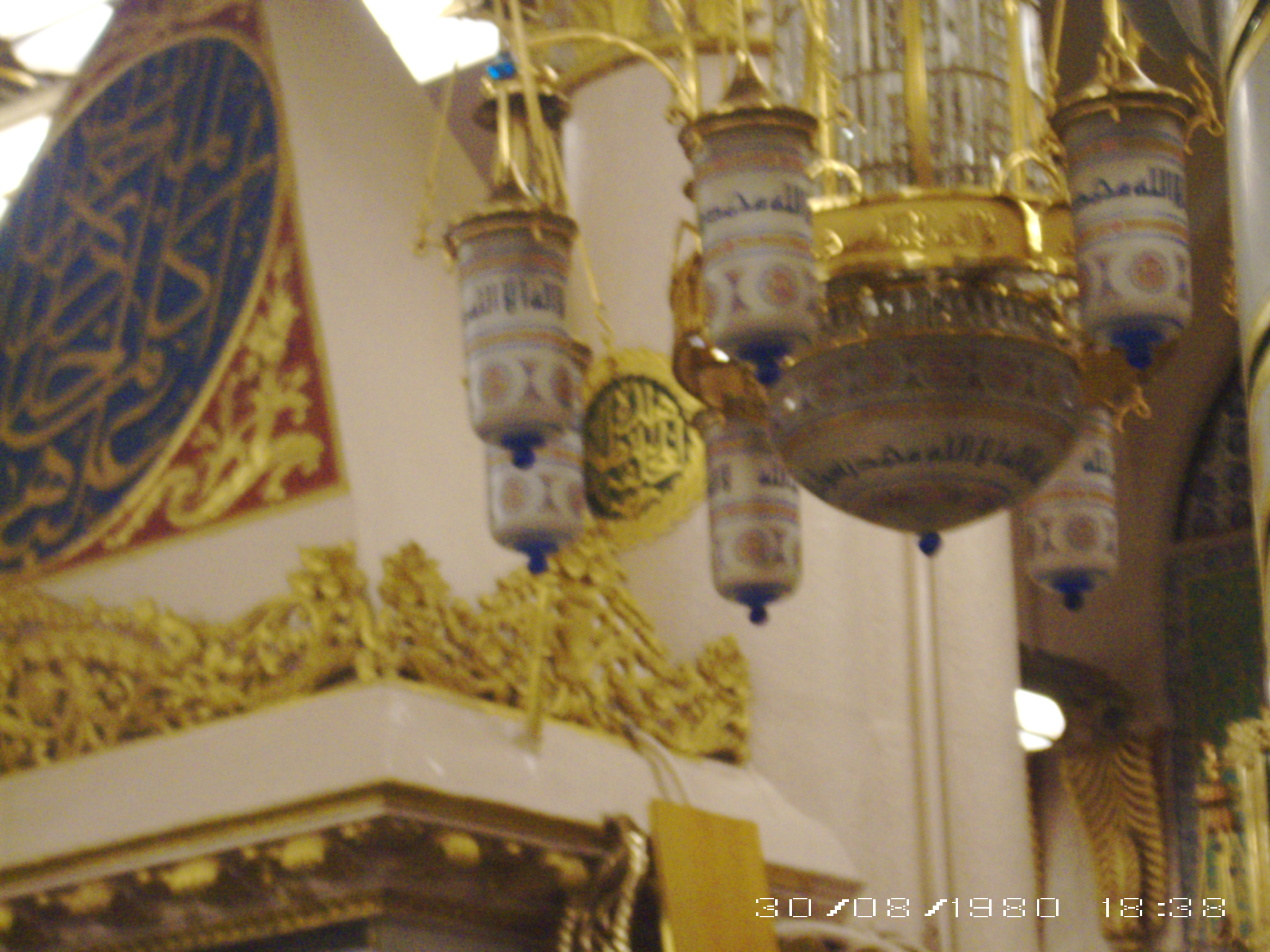 Another view of istewana Hanana (rounded name plate is visible) 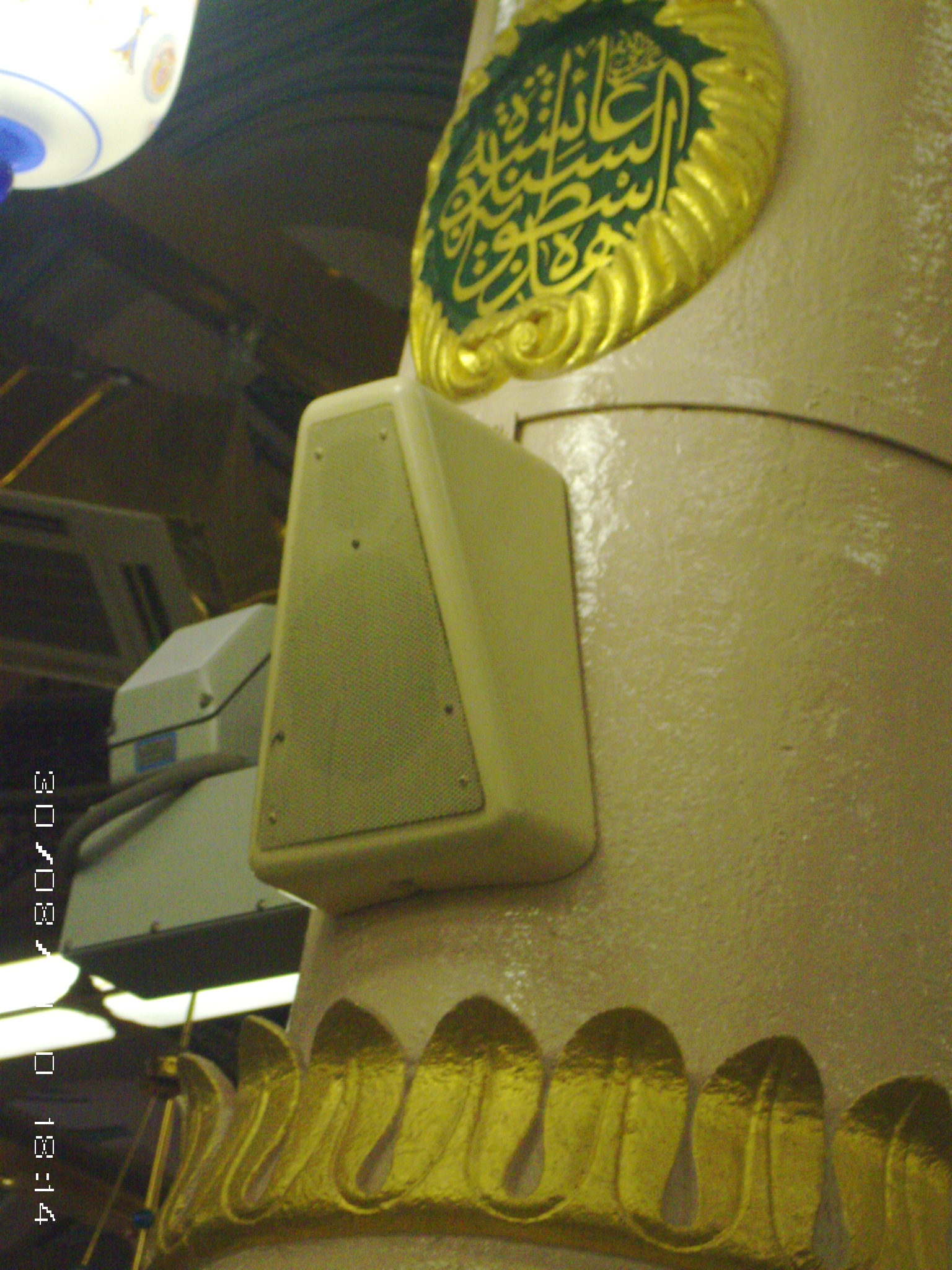 1 .  This pillar is situated few feet behind, at the left hand of Mehrab-e-Nabvi if your face is towards QIBLA.

2 .  Once Prophet (S. A. W.) indicated a spot in Riaz-ul-Janna and said, "If I (S. A. W.) tell you the importance and reward of praying at this point, people will start to draw their names to pray here first". Prophet (S. A. W.) did not disclose this point but once UMMUL-MOMEENEEN Syeda Aisha (RA) pointed out that particular place to her nephew. The pillar is situated at the point which was indicated by Syeda Aisha (RA) and the name of this pillar is embossed over it. 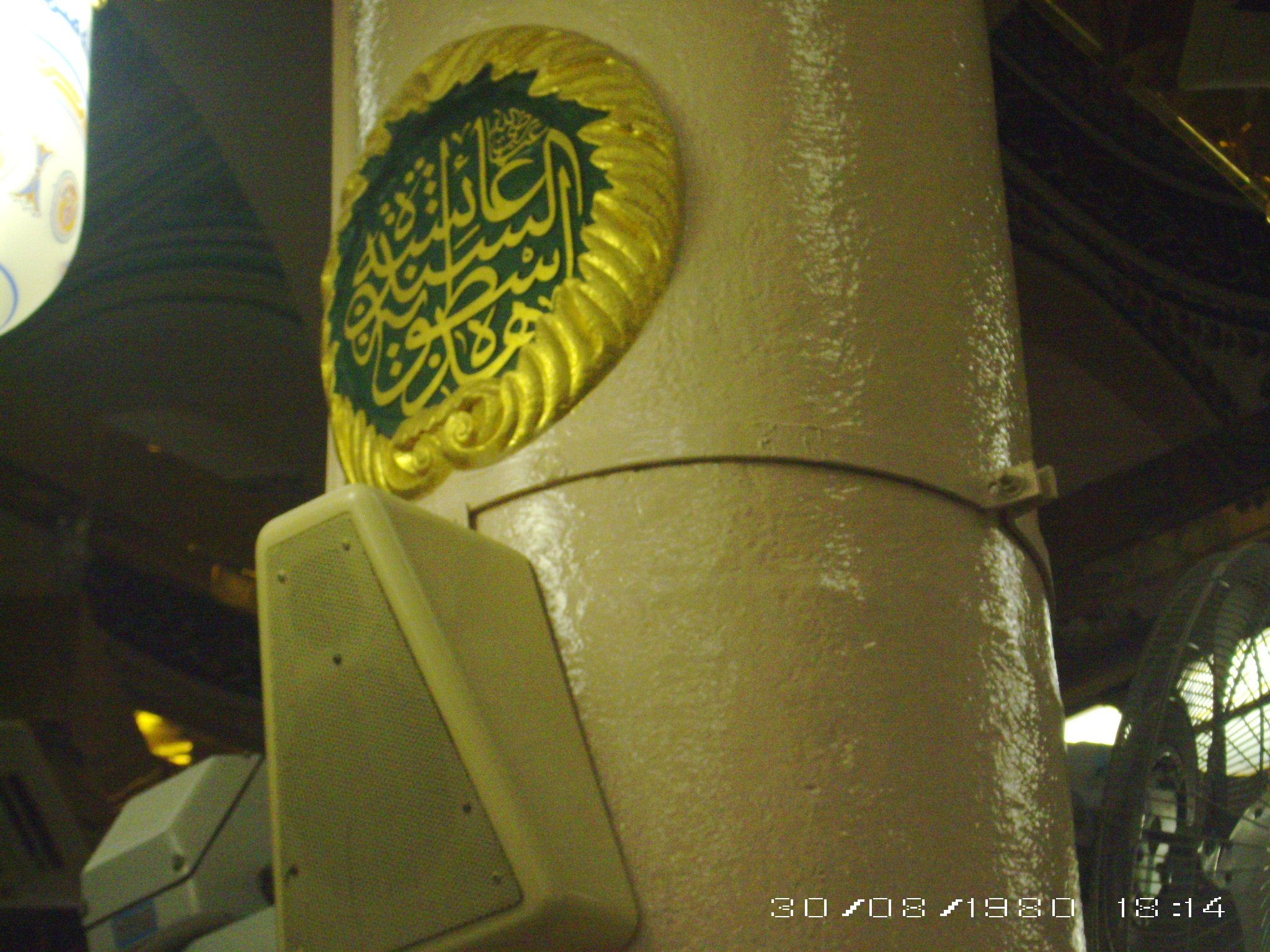 a Another view of AISHA PILLAR

1 .  Few feet behind Mehrab-e-Nabvi you will see three pillars between Mehrab and green wall of Prophet's Shrine (Wall of Riaz-ul-Janna side). The middle one is Istevana-e-Abi-Lababa. It is just after Istevana-e-Aisha (RA). 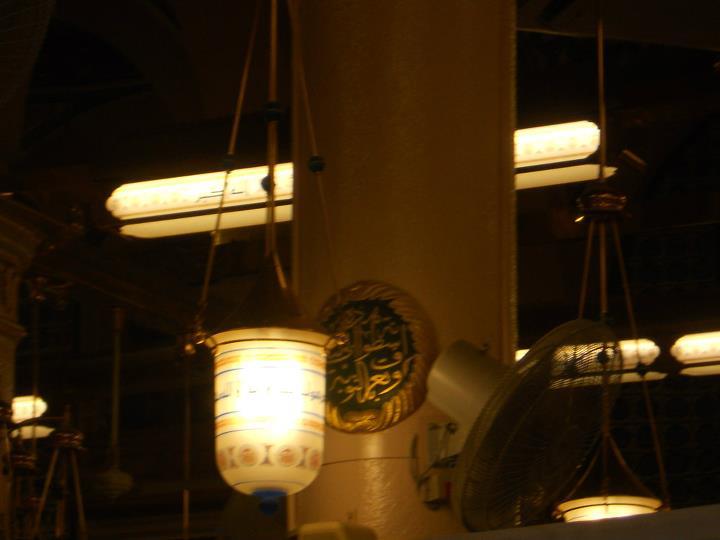 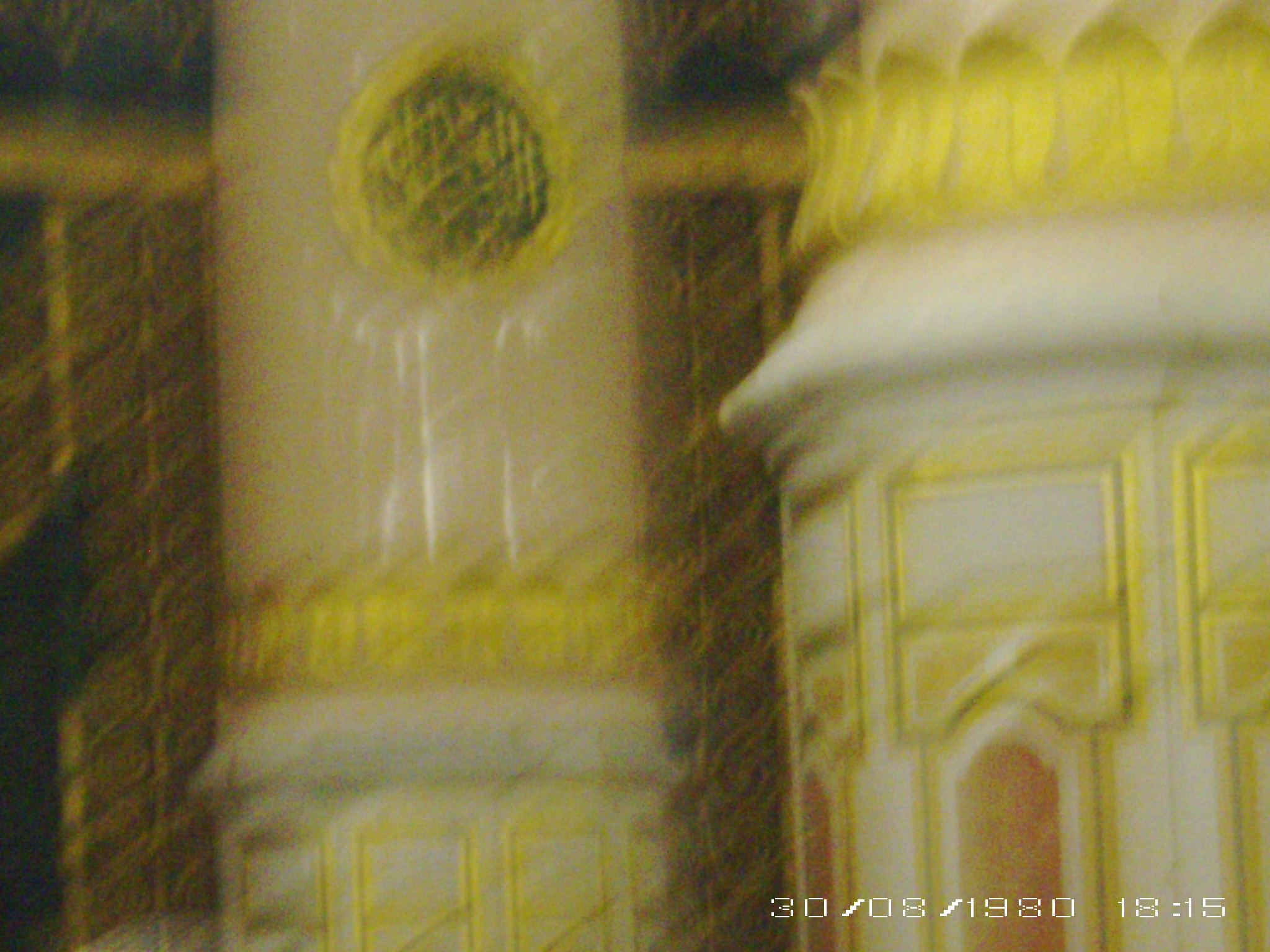 
2 .  Once a companion Syedna Abi Lababa made a mistake unintentionally. He had opened the secret of  prophet Muhammad sallalaaho allihi wasalam and  pointed out mistakenly  towards enemies which were in muslims custody that you would have been killed .He felt much guilty of his mistake and fasten himself with a stem and declared that he would keep himself fasten unless Almighty Allah forgave him. When Almighty Allah accepted his apologize, Prophet (S. A. W.) came and unfastened him with his Holy Hands. It is really a very spiritual and historic pillar. 2 .  It is the place where Prophet (S. A. W.) used to sit (Stay) for Aatekaf during last ten days in Ramadan. There was a window in the wall and Syeda Aisha (RA) used to give oil and comb in Prophet's (S. A. W.) hairs from inside her house. The image of this window may be seen today. 1 .  The middle pillar among those three which are half inside the shrine and half outside in Riaz-ul-Janna is known as Istevana-e-Haras. Haras means 'fear'

2 .  It is the place where companions used to set their duties for the security of Prophet (S. A. W.). Once Syedna Ali (RA) paid the duty as a guard of Prophet's (S. A. W.), therefore, the second name of this pillar is ISTEVANA-e-ALI (RA).

3 .When the vahee  had been revealed and Almighty Allah took the responsibility of security of Prophet Muhammad sallalla ho allihiwasalam, such duty had been removed from this place (now pilaar of Haras)

1 .  The last pillar adjacent to green wall of Prophet's (S. A. W.) Shrine in Riaz-ul-Janna is called Istevana-e-Wafood.

2 .  Actually, this was the place where Prophet (S. A. W.) used to meet with different local and foreign delegations to solve different matters. In Arabic delegations means "Wafood" and it is the reason of this pillar's name. 1 .  This pillar is now inside the shrine and can not be seen. It was the place where Prophet (S. A. W.) used to offer  Tahajjud Prayer. It is inside the shrine near the back wall where now the plate form of
Mehrab-e-Tahajjud is present which is separately described.

COMPLETE MAP OF PILLARS AND RIAZ-UL-JANNAH 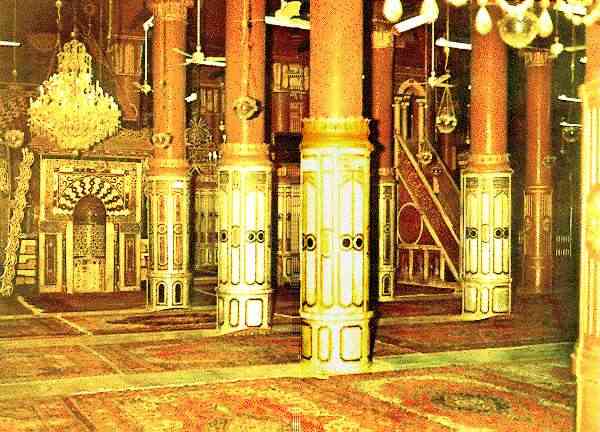