HAJ-E-TAMMATU.
1. Enter in Harams territory between 1st of Shawwal to 7th day of Zilhij with the intention to perform Haj and Umra separately.

2. After performing Umra as described in Umra procedure (Ritual of Umra), pilgrims should have to shave their heads  or to cut 3/4 hairs of head . Women cut a little bunch of  hairs from the tail  or  from sides of  their hair.

3. Pilgrim puts off his /her Ahram and wear normal dress. He/She has to wait the morning of 8th Zilhij living in haram (makkah) territory. The restrictions of Ahram are no more there.

4. In the morning of 8th Zilhij or in between the night of 7th and 8th Zilhij, a pilgrim takes bath as Sharia described. Taking water into the softer part of the  nose and to the dead end of throat is essential to become clean and pure . whole body must be washed by water. No part, even a hair of  the body should remain dried.

5. Put on Ahram:-
a)    A man has to put on  two white sheets of clothing. One is wrapped on the lower part of the body. Belt may be used to tighten the lower sheet of clothing. Other clothing sheet is taken over the upper body. On this stage head may be covered. The front of the feet must be uncovered, socks and shoes are not allowed in the estate of AHRAM.

b)   A lady may wear loosened dress comprising of shirt and trousers. HEAD must be covered under the scarf which is fasten on the head. Face may be uncovered. if uses HIJAB, be careful cloth must not touch the skin of face.

7. After completion of Two Rakat of Nafil, a man must uncover his head. And beg Dua of  intention of performing haj.

"O Almighty Allah! I intend to perform Haj. So, Please make it easy for me,

help me to do so, and accept my this humble effort. Ameen."

Women will also do as a man does in this Point No.7 except uncovering head.

8. Now you must recite the slogan of HAJ -TALBEEH.

(Listen Talbeeh)
9. Now you have come under the restrictions of AHRAM.

10. After wearing AHRAM it is optional to do Tawaf. If you have time you can, otherwise you may leave it.

11. After Fajr Salat on the8th of Zilhij, move towards Muna. You will have to stay  there atleast five days. So, you may keep one pair of fresh AHRAM and necessary amount for money, for sacrificing animal on the 10th Zilhij.

12. In between Makkah and Muna, pilgrims must recite repeatedly Talbeeh.

13. You will stay in a tent which is pitched in Muna. 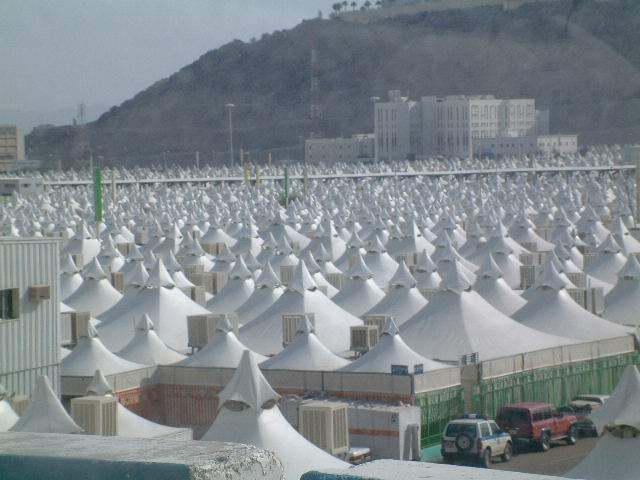 14. Take rest here and offer the Salat of Zuhar, Asar, Maghrib, Esha of 8th Zilhij and Fajr of 9th Zilhij, here in Muna.

16. This stay of ARAFAT is called "Waqoof ".   It is the Main Act of HAJ. If a pilgrim doesn't perform Waqoof, his /her Haj is not Considered Valid.

17. Here the combined Salat of  Zuhar and Asar are offered under the one AZAN.

18. Both the prayers of Zuhar and Asar is consist of only two Rakats each instead of four Rakats. Here all the pilgrims are considered as passenger and pilgrim may avail sharia concession of  curtailing the Rakat of Salat from 4 to 2. it is called QASAR SALAT (curtailed prayers)

19. Till Maghrib (Sunset) beg Duas as it is very precious time. Beg Duas in Standing, sitting and in lying positions.

20. At the time of Sunset DON'T OFFER MAGHRIB PRAYER TODAY. Maghrib Prayer is not allowed in time today in ARIGHT. You have to delay it till you reach Muzdalfa. It is an special  concession for pilgrims given by Almighty Allah on on 9th zihjah,

21. After the sunset without offering Maghreb prayer, you will have to move towards Muzdalfa. It is open ground of 3 miles.
It in between Muna and ARAFAT.

Location of makkah munna muzdulfa and arfat in a glance

22. Reaching Muzdalfa in the night, you will have to offer Maghrib and Esha Prayers jointly under one AZAN. Sometimes people reach here in the midnight due to heavy rush. Both the prayer will be offered after settling down in Muzdalfa. It may be a mid night time. Maghreb and Esha are not allowed to offer during journey between ARAFAT and Muzdalfa. Remember no sunna and Nafil Salat is allowed to offer in between Maghreb and Esha.

23. Keep the repetition of Talbeeh and Duas unless you reach to Muzdalfa.

24. You will have to spend whole the night under open sky in Muzdalfa. This is precious night and it is said the worship of this night is more beneficent to Lalat-ul-Qadar.(5 odd date nights of last ten days in month of holy ramadan)

25. In Muzdalfa, it is better for a pilgrim to spend whole night begging Duas and recitation of holy Quran, but a little rest and sleep may be taken.

26. You will have to collect 49 pebbles from Muzdalfa field to throw over the pillars of Satins next day in munna--jumrat. it may be noted here that  pilgrims have to use 7 pebbles on 10th zihijah and 21 pebbles each  on 11th and 12 th zilhijah.it is compulsory and mandatory for all pilgrims. The total of these compulsory pebbles become 49 which is necessary for every pilgrim to collect in muzdalfa. Point may  further be noted  that the stay in munna on 13th zilhijah (4th day) is optional for a pilgrim . If he/she wants to stay in munna on 13th zilhijah, he/she will have to throw 21 more pebbles over satin pillars on 4th optional day .To fulfil this requirement the 70 pebbles instead of 49 have been collected by the intended pilgrim. Some extra pebbles may  also be stored . 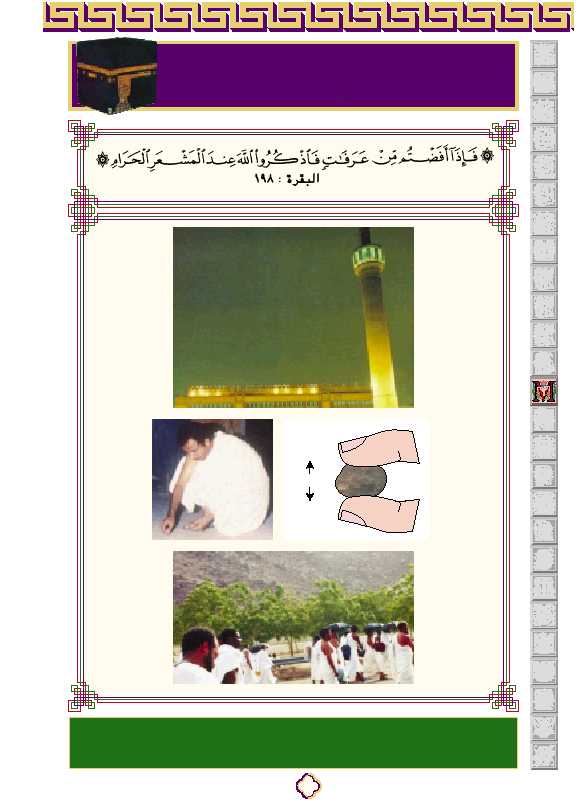 27. Fajir prayer  is offered exactly in time in Muzdalfa on 10th zilhijah. Govt. of Saudi Arabia arranges the sound (roar) of Bomb Blast which indicates that the  time of fajir starts now.

28. After Fajir Salat when sun rises, you will have to move back  towards Muna , the place where from you had started your journey towards Arafat last day (i.e. 9th  zilhijah)

29. Now you are in Muna ,back to your tents. Today is 10th Zilhij. Generally, on the 10th of Zilhij all the Muslims celebrate the festival of Eid. They offer prayer of Eid but There is NO EID PRAYER for Pilgrims. It is a concession given by Almighty Allah.

30. On 10th of zilhij following essential acts have to do by a pilgrim step by step

a)   Obviously enter in Muna.

b)    Come to biggest Satin pillar before Azan of Zuhar (ZAWAL) to throw 7 pebbles out of 49 or 70 which you had
collected last night in Muzdalfa. .Becareful today youwould have to throw seven pebblles to only biggest sattin. 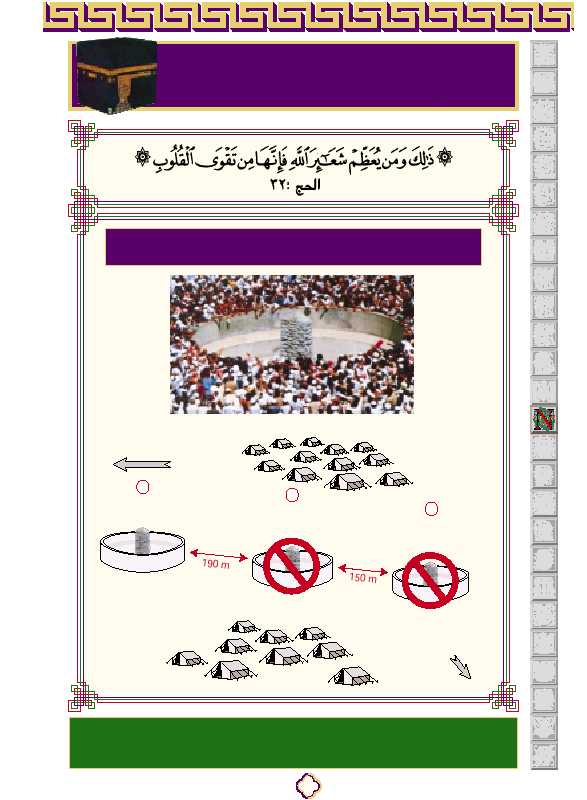 See the position of  sattin pillars. It shows pepples will not be
thrown to second and third pillar of devil.

c)    Before throwing pebbles, you will have to stop the Slogan of HAJJ that is Talbeeh... Now do not repeat
Talbeeh.

d)    When you throw pebbles, each and every time recite BISMILLAH. ALLAH-O-AKBER. 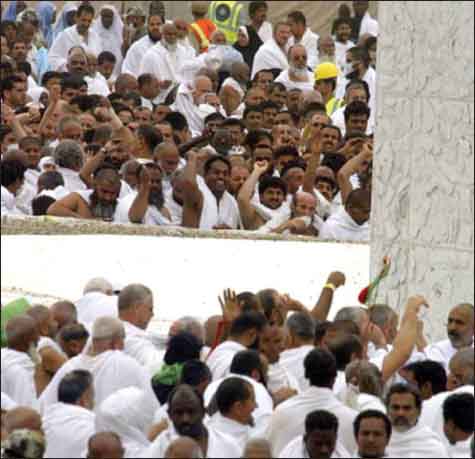 e)    It is noted that three pillars of Satins (Serpent) but to day you have to throw pebbles over biggest Satin (Jamra-e-Uqba).

f)    Be careful ---do not bend yourself here to pick something from ground. Due to heavy rush. You may be crushed by the
crowd.

g)    Now a days an  upper level bridge has also built near satin pillars (jumrat) which has doubled the capacity of  pilgrims
to throw pebbles in a time.

h)   Ladies and weaker may do this act after Maghreb. It is allowed as a special case due to heavy rush in morning session.

i)    After RAMI that is throwing pebbles over biggest Satin, you have to scarify your animal. It is a compulsory act of
haj. Goat or sheep must be slaughter in slaughter house of muna

j)    Now ,a man shaves off his head. A woman cuts hair equal to 1/3 of her index finger from he tail of hairs and from all fo
hairs or from all four  sides of  head 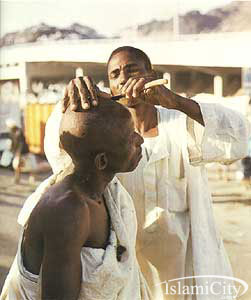 k)    Now you may put off AHRAM and wear normal dress. Whatever do you like. A woman will keep her head covered.

l)    Now you are free from all the restrictions of AHRAM except the bindings of husband wife relationship. Wife
over husband. husband over wife is still restricted (HARAM) till tawaf-e-Ziara is not completed.

m)    After all these acts, you will have to come to Makkah for Tawaf-e-Ziara. It is better to perform on 10th Zilhij. But you
are allowed to perform this Tawaf till Maghreb of 12th Zilhij.

n)    If somebody does not perform till Maghreb of 12th Zilhij, he will have to pay fine (DA`M) which is equal to scarify one
.goat. Despite of paying fine of goat, Tawaf-e-Ziarat will have to do.

o)    After Tawaf-e-Ziara, the last  binding of ashram,-- the wife and husband relationship--  also lifted.

p)    One thing is important to note--, Tawaf-e-Ziara is generally carried out in general dress. Ahram is also allowed but not
compulsory.


31. After Tawaf-e-Ziarat, Saiee has to do. Come to Safa Mount and complete Seven rounds of Saiee. ThisSaiee is done in normal dress NOT in AHRAM. 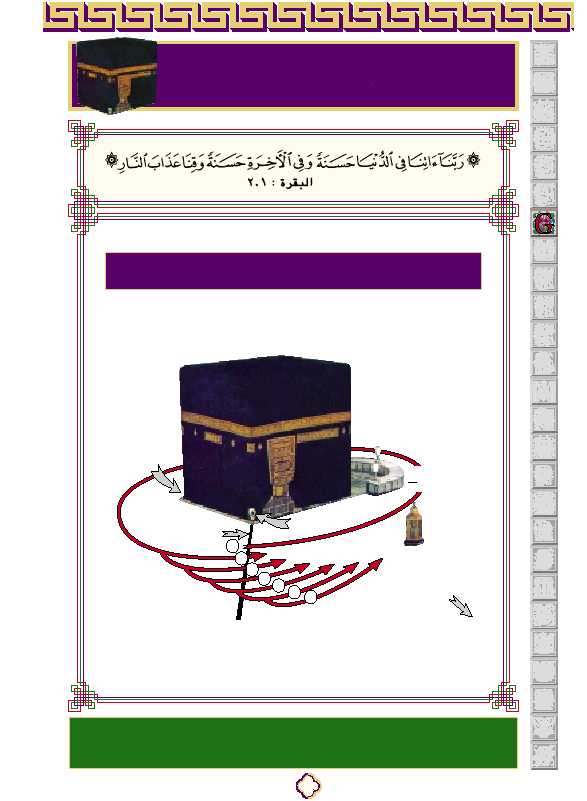 Tawaf is done in this way

32. After Tawaf-e-Ziara and Saiee, you must have to come back to Muna and you will have to stay there till Maghreb of 12th Zilhij. IT IS IMPORTANT, YOU MAY NOT SPEND NIGHT OUT OF MUNA EVEN IN MAKKAH TILL THE END OF 12TH ZILHIJA. If you do Tawaf-e-Ziarat in night, you have to come as soon as it completes in the night.

33. On 11th Zilhij, If you could not scarify your animal on 10th Zilhij and if you could not go to Makkah for Tawaf-e-Ziarat, you may do these acts this day. If you have done both the works on 10th Zilhij, you have only to throw pebbles to all three Satins (Serpent). But remember following steps.
a)    Act of throwing pebbles are done after 1200 noon to Fajir of next day that is 12th Zilhij.
b)    Pebbles are thrown to all three Satins.
i)    First to Smaller Satin Pillar.(seven pebbles)
ii)   Second to middle Satin Pillar.( seven pebbles)
iii)  Third to Biggest Satin Pillar.(seven pebbles)


You have to Stay in MUNA in the night.

36. if you want to spend even  the 4th optional day in munna , you will have to throw pebbles in same way as you had done on 11th and 12th day. Before Maghreb (sun set) the pilgrims may return to Makkah leaving munna